We’re all well aware that the current global coronavirus pandemic is changing the way people shop. As the pandemic moves in waves across the world, we are seeing ripples of change in demand for groceries and household items – from stockpiling when the pandemic looked set to arrive in a given region, to online shopping and cupboard refills during lockdown, and now some tentative moves towards a new normal in China.

In this week’s market insight, we take a look at which categories of edible and non-edible items have seen the biggest jumps in demand and extrapolate what demand might look like over the rest of the year. The data used in this analysis mainly cover Italy, France, Germany, the UK, the US and New Zealand.

By how much has demand risen?

It’s no surprise that the data confirm a huge increase in grocery sales over recent weeks, with the start of the surge in demand largely coinciding with the spread of the virus around the globe. However, demand appears to be showing signs of stabilisation in countries that began stockpiling earlier (France and Italy).

Which types of product have seen the biggest jumps in demand? 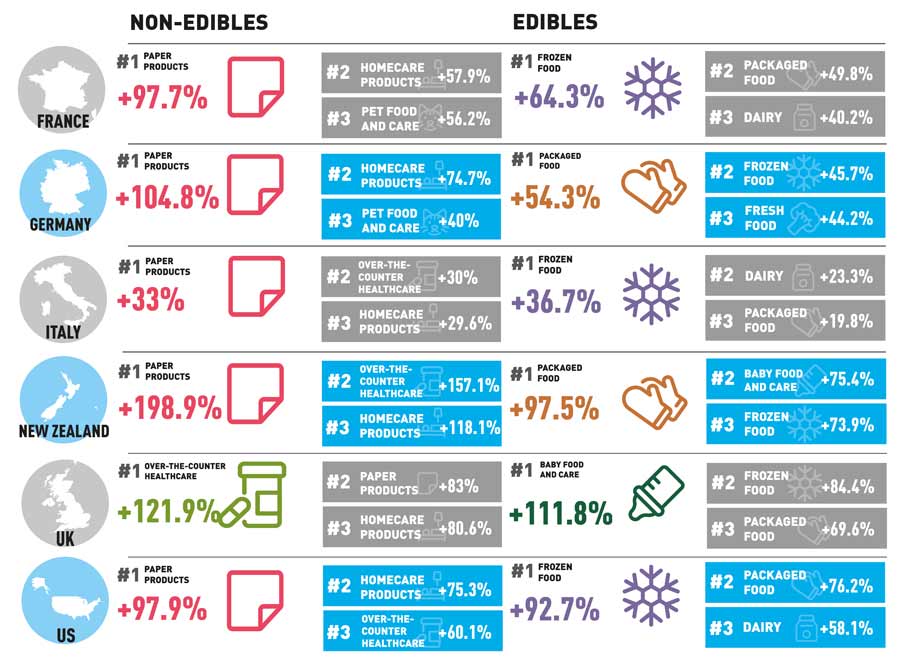 Demand for certain items has more than doubled in some countries. Paper products are still in peak demand across all of the countries considered, as are products that help people clean their homes. Having peaked dramatically in recent weeks, sales of over-the-counter healthcare are now returning to normal levels in France and Italy, again most likely due to their more advanced stage in the pandemic.

Frozen and packaged food products continue flying off the shelves in all of the countries as consumers turn to items that have a longer shelf life.

While not all product types have seen such dramatic spikes in demand as those shown, total demand is higher within almost every grocery category compared with the same period last year. A few categories have seen a fall in demand, such as cosmetics, sales of which have fallen across all of the countries looked at, except New Zealand.

It should also be noted that these data are a snapshot of one week (ending 22 March 2020) and variations in demand spikes should be expected over different weeks.

Will the peak in demand be counterbalanced by demand slumps in the future?

The surge in demand has been for both elastic and inelastic products. In other words, some items are being bought in higher volume and also consumed in higher volume – such as household cleaning items and hand sanitiser. These products are therefore likely to see steady or above-average demand over the year as a whole.

What might demand look like in different regions of the world over the rest of the year?

Demand is likely to follow a similar pattern in each region of the world, but at different times, depending on when the pandemic reaches its peak in that region.

We applied these assumptions to five categories (bakery, beverages, confectionery, dairy, and soups, sauces and dressings) to develop projections for overall growth per quarter in four regions (Asia Pacific, North America, Latin America, and Europe, the Middle East and Africa). 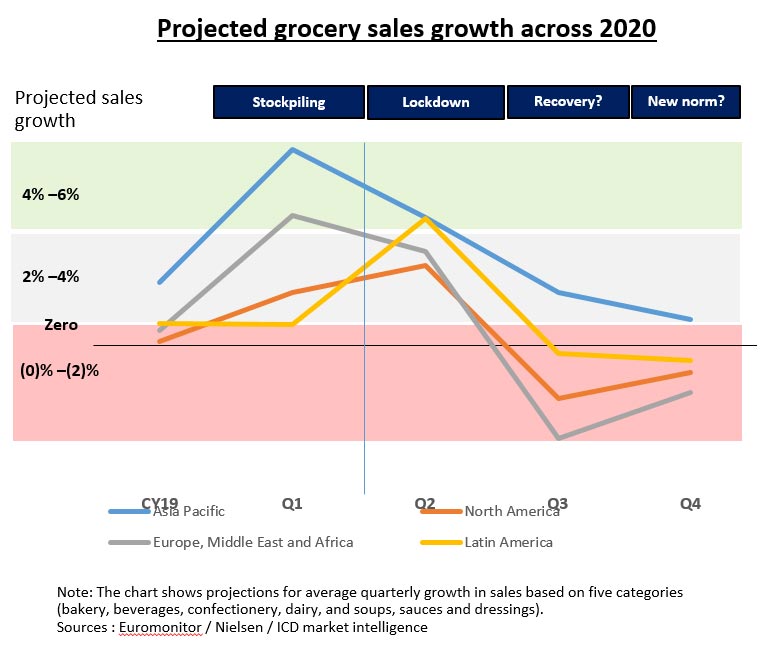 In this quarter, demand is likely to continue stabilising in China and Europe, while continuing to increase in North America and Latin America. As China moves through the phases ahead of the other regions, it will be a key region to follow in the weeks ahead.

That’s why, in next week’s issue, we’ll take a look at the latest developments in China. Check back then for more insights!