Tate & Lyle PLC (Tate & Lyle) is pleased to announce the appointment of Imran Nawaz to the position of Chief Financial Officer, and to the Board of Tate & Lyle, with effect from 1 August 2018. He succeeds Nick Hampton in that role, who, as announced on 16 January 2018, was appointed Chief Executive of Tate & Lyle from 1 April 2018.

Imran Nawaz joins Tate & Lyle from Mondelēz International where he has been Senior Vice President Finance Europe since 2014. 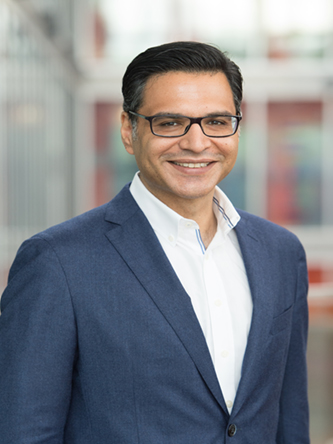 Prior to that, during a 16-year career at Mondelēz and Kraft Foods, he held a number of senior financial roles across Europe, the Middle East and Africa.

Nick Hampton, Chief Executive said: "I am delighted to welcome Imran to Tate & Lyle and the executive team. He brings with him deep experience of the global food industry, and a proven track record of financial leadership. I very much look forward to working with him as we continue to drive the Company’s growth agenda.”

Gerry Murphy, Chairman of Tate & Lyle said: “Imran’s broad financial, business and international experience will be of great value to Tate & Lyle, and he is a very welcome addition to our Board.”

Imran Nawaz started his career with the auditing firm, Deloitte, in New York where he spent three years. In 1997, Imran joined Philip Morris in Corporate Audit before moving to Kraft Foods initially to work in Global Supply Chain Finance in London and then as a Regional Financial Controlling Manager based in Vienna. In 2005, he was appointed Finance Director, Middle East & Africa, and then Category Finance Director, Cheese & Grocery Europe in 2007 and Vice President Finance Chocolate Europe in 2009. In 2013, he became Vice President Finance Eastern Europe, Middle East, and Africa before being appointed as Senior Vice President Finance Europe in 2014, based in Zurich, Switzerland. Imran holds a Bachelor of Science in Accountancy at Lehigh University, Bethlehem, Pennsylvania, US.

Imran Nawaz has been appointed on an annual salary of £470,000. This will next be reviewed in April 2019. He will also receive a company contribution to his pension plan of 20% of base salary. He will also be eligible for a bonus under Tate & Lyle’s discretionary bonus scheme. The bonus scheme currently provides for a bonus paid at 50% of salary at target and a maximum opportunity of 175% of salary. Bonus awards are subject to performance conditions and awards in excess of 100% of salary are currently made as shares which are released after 24 months. His bonus participation in the financial year ended 31 March 2019 will be on a time pro-rated basis.

Imran will be eligible to receive a Performance Share Plan (PSP) award of up to 300% (maximum) of base salary which will be subject to a three-year performance period. He is required to accumulate a shareholding in Tate & Lyle equivalent to three times base salary within five years of joining the Company.

To compensate Imran for incentive awards that he will forfeit at Mondelēz International, Tate & Lyle will make him a one-off Restricted Stock Award (RSA) of £800,000 worth of shares in Tate & Lyle (delivered in two equal tranches on the first and second anniversaries of his employment with Tate & Lyle) subject to achievement of performance conditions based on individual objectives. In 2018, he will receive a PSP award at 300% of his full annual salary subject to normal PSP performance conditions. The RSA and 2018 PSP awards will be subject to forfeiture/repayment if he ceases to be employed in the first 36 months of employment due to his resignation or dismissal for cause.

Imran will receive relocation assistance and a taxable allowance of £200,000 (gross) to mitigate expenses of relocating from Switzerland to UK in line with the Company’s policy.

In accordance with paragraph 9.6.13 of the Financial Conduct Authority’s Listing Rules, the Company confirms that:

i) Imran Nawaz has not held any directorship in any publicly quoted company at any time in the past five years; and

ii) There are no further disclosures to be made pursuant to paragraph 9.6.13 of the Financial Conduct Authority’s Listing Rules.

About Tate & Lyle:
Tate & Lyle is a global provider of solutions and ingredients for food, beverage and industrial markets.

Food & Beverage Solutions consists of: Texturants, including speciality starches; Sweeteners, including low- and no-calorie sweeteners; and a Health and Wellness portfolio comprising mainly speciality fibres; and Stabilisers and Functional Systems, which are bespoke ingredient blends that ensure foods retain their structure.

Tate & Lyle is listed on the London Stock Exchange under the symbol TATE.L. American Depositary Receipts trade under TATYY. In the year to 31 March 2019, Tate & Lyle sales totalled £2.8 billion. For more information, please visit http://www.tateandlyle.com or follow Tate & Lyle on Twitter or Linkedin.